A new poll reveals who potential 2024 GOP primary voters want in the race. While former President Trump is the only one who has formally announced a run in 2024, it hasn’t stopped the speculation from swirling. And while Trump is in the lead – that might not be the reason to look into this latest survey. Instead, it could be about who else was voted for.

Main Takeaways: In a January 6-8 2023 survey by the Morning Consult, 4,470 Republican primary voters weighed into a series of questions on the 2024 GOP primaries.

Morning Consult’s first poll from this study shows a large field of potential rivals for the former president. This list includes Ron DeSantis, and Mike Pence two that seem like obvious entries at this point. Though a long list of others follow, including Liz Cheney, Nikki Haley, Ted Cruz, Greg Abbott, Mike Pompeo, Tim Scott, Kristi Noem, Glenn Youngkin, and a choice of ‘someone else.’

Results: In this survey, Donald Trump received a 46% support rate over the other 11 options. Following Trump, Ron DeSantis received 33% of the voter’s support ranking as the second highest potential candidate. Trump and DeSantis are followed by Mike Pence though he has a significant decrease of support with only 9% of voters supporting him and the other 8 candidates have a variety of 3%, 2% 1%, and 0% of support. 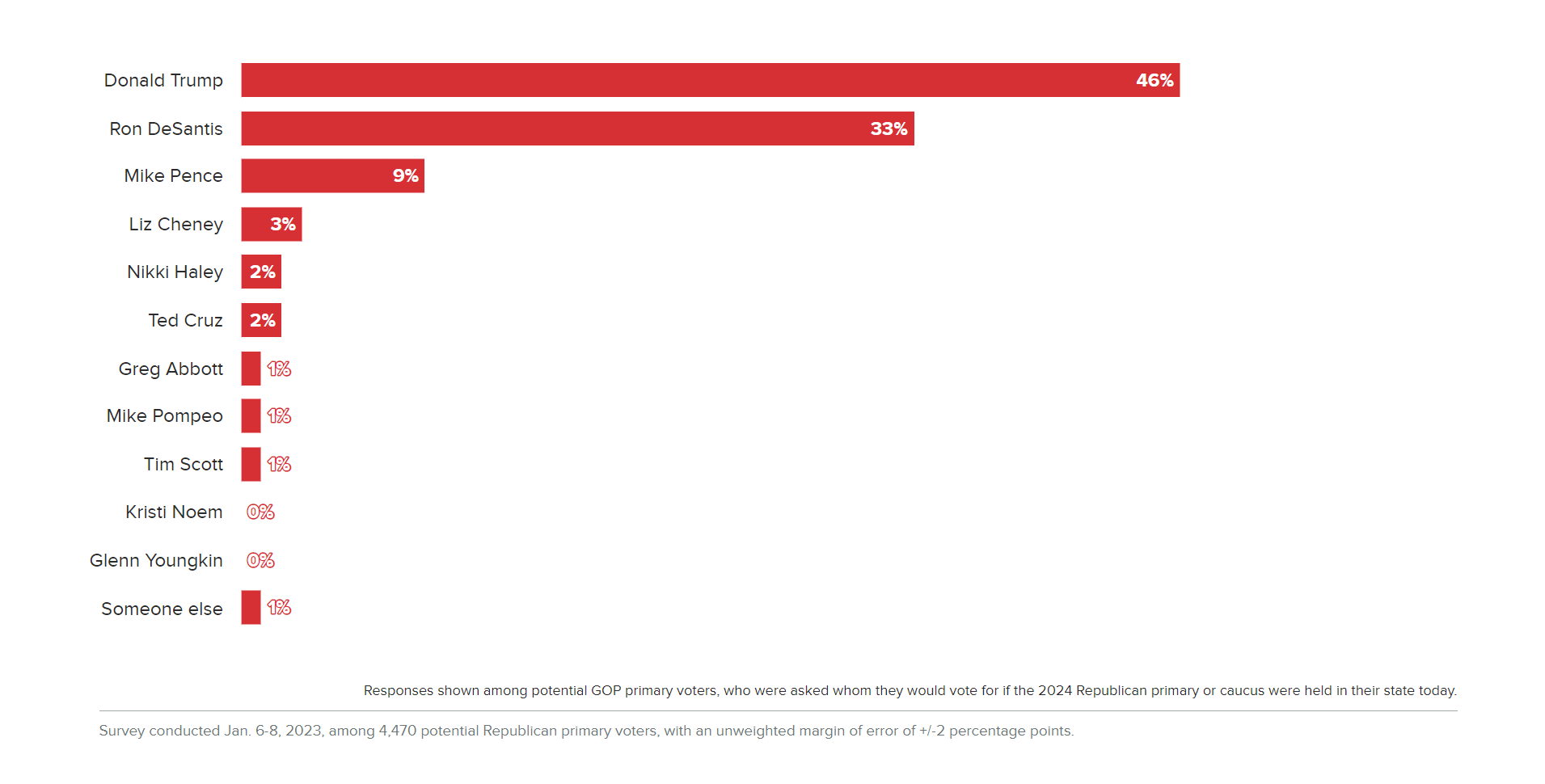 Who Will Win Control Of the Republican National Committee?

My ideal new administration would be for Trump to have DeSantis as his running mate, having DeSantis as VP would be a great team for the first term. Since Trump can only be in one term, DeSantis could run for two more terms and our nation would have 12 years of sanity in the Oval Office! I don’t know what came between Trump and DeSantis, but I wish they could team up to save our country from all the damage the idiot in the Oval Office has done in the short time he has been in office. Our economy was doing great with Trump, China and Russia were being put in their place, we did not have the wars we are wasting money on now. I don’t know what happened to the ties Trump and DeSantis used to have, but I wish they could work it out!

Trump is the man

I wouldn’t mind seeing DeSantis as VP behind Trump so he could get a feel for the trash in our government so he could deal with it next.

I have posted this before, but I would like to see Trump and DeSantis iron out whatever problem pulled them apart. I would love to see them join forces with Trump as President and DeSantis as his VP. After Trump finished his term, DeSantis could step in and serve 8 years. Our Nation would have 12 years of sanity and be able to repair all the damage Biden has done. I would love to see the gains I saw in my IRA account in Trump’s 4 years after it was stagnant for years before he took office, all those gains disappeared with Sleepy Joe in the White House.

wpDiscuz
5
0
Would love your thoughts, please comment.x
()
x
| Reply
You are going to send email to
Move Comment