Home
Hollywood
Alec Baldwin Kills One Person, Wounds Another in on Set Accident

Actor and Director Alec Baldwin accidentally killed one woman and injured a man with a prop gun while on the set of his new film “Rust.”

The shooting involved actor Alec Baldwin and a prop gun, the prop gun is alleged to have gone off only once and to have fired live ammunition. The round is alleged to have struck two individuals, the film’s director of photography Halyna Hutchins and Director Joel Souza. Halyna Hutchins was tragically confirmed to have been killed in the accidental shooting, Joel Souza was taken to the hospital but it appears now that he will survive. The Santa Fe County Sheriff’s department is investigating this matter but no arrests have been made and no charges have been filed.

In a public statement Baldwin said “I’m fully cooperating with the police investigation to address how this tragedy occurred and I am in touch with her husband, offering my support to him and his family. My heart is broken for her husband, their son, and all who knew and loved Halyna.“

Here at FullMagNews we work with a lot of firearms, guns are regularly on set for shooting videos and we frequently take photos with firearms. When it comes to mixing cameras and guns some of the rules get bent when it comes to safety, but when this occurs other precautions are taken to ensure something like what happened with Alec Baldwin doesn’t.

Take this photo for example: 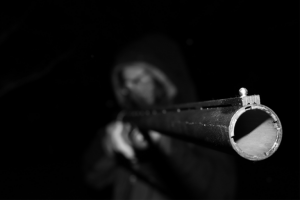 When we film episodes of Unloaded with Grace Boatright we take the precaution of removing ammunition from the room we are filming in. Accidental shootings occur as a result of negligence and stupidity, while filming we want to get good shots but that doesn’t mean removing safety from the equation.

We can assume that safety of staff was not the highest priority for the film makers, this death was entirely preventable and several acts of negligence must have occurred for this to have happened on set. Someone on the props team probably loaded live ammunition into the prop gun, the prop gun was likely a real gun and not a prop, no one on the set cleared the gun prior to handing it over to Alec Baldwin, and Alec Baldwin did not clear this gun prior to doing the shot. These are the mistakes likely made for this accident to occur, we can’t say for sure until a full detailed summary comes out from either the creators of “Rust ” or the Santa Fe Sheriff’s Department.

The disconnect between Hollywood and the world of firearms is partially to blame for this incident. Alec Baldwin himself is no stranger to filming with guns but he certainly is no fan of them outside of these Hollywood sets. Had Baldwin at least been familiar with firearms he may have cleared the gun himself, if it comes out that he did clear the gun and the mistake was a member of the props team loading live ammunition into the firearm then this mistake is one that cost someone their life and put blood on an innocent man’s hands.

A little boy will never see his mother again because of the mistakes that were made on set, that’s the real tragedy of all this. Someone should be held accountable for what happened, not because it was an accident but because it was a preventable accident.

Steve Bannon Turns His Attention To His Critics On ’60 Minutes’

Melania Trump Gets an Unlikely Defender